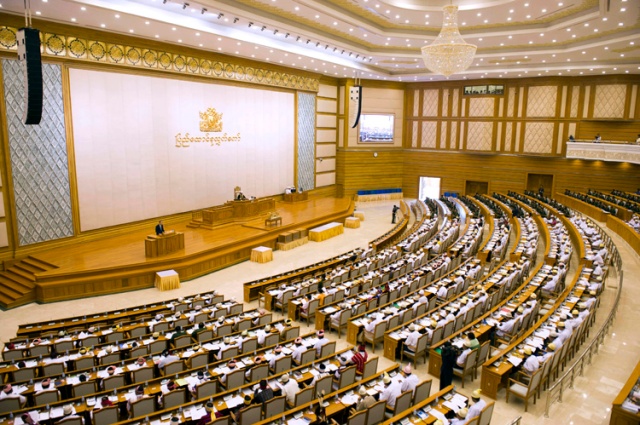 February 1st marked a new day for the Republic Union of Myanmar as the people in the country celebrated the re-opening of the parliament with the newly elected MPs, coming in_taking their rightful positions.

So today I will dedicate this post to the previous government and to the future of Burma in the years to come.

Back in 2011, in the EBO ANALYSIS PAPER No. 2 regarding the inauguration speech by President Thein Sein, there are a few questions that were asked by the author:

As you can see that all of these questions can only be answer 4 years after the speech; and from his last state of union address, President Thien Sein, have mentioned many positive changes and improvements that the country has achieved during his presidency, or in another words, have tried to give answers to those questions above.

Before looking his accomplishment, let’s look at his promises:

President U Thein Sein & His Promises

I shall uphold and abide by the Constitution and the laws. I shall carry out the responsibilities uprightly to the best of my ability and strive for further flourishing the eternal principles of justice, liberty and equality. I shall dedicate myself to the service of the Republic of the Union of Myanmar

Here is what the brief summary of what the former president of Myanmar have said in his inauguration speech back in 2011:

– After a short formal greeting to the upper and lower house, he continued by mentioning the period of “untold misery”, which according to him, the people were saved by the Tatmadaw.

The Tatmadaw with a strong sense of duty and loyalty saved the country several times whenever the country was close to collapse and loss of independence and sovereignty. Also in 1988, the Tatmadaw government saved the country from deteriorating conditions in various sectors and reconstructed the country. Now, it has laid sound foundations to build a peaceful, modern and developed nation.

He as the government promises to uphold the 3 main national causes including:

– Non-disintegration of the Union

There are 3 main sectors that are needed to be strategically improved in order for Myanmar to thrive and to accomplish the national causes mentioned above. The president proposed the 3 might:

– Material development including the construction of roads, bridges, educational institutions, hospitals and health centers are needed to bridge the gap between races and to omit the natural barriers among states.

– By building more roads and bridges, improving the education and health standards, and creating the economic foundations, the government believe that it will lead to the improvement of the socio-economic status of national races.

The greater number of roads, railroads and bridges the nation sees, the smoother transport there will be between one region and another, and friendlier relations there will be among national races.

– In addition to this, the government will try to ensure the flourishing of Union Spirit, the fundamental requirement of national solidarity.

– Mr. president encourage everyone to follow the 7 Steps Road Map and the constitution by even mentioning:

They (those who opposed) are all citizens of our country. Therefore, they have to accept our government as their government.

– However, he also welcome any changes to the already established constitution as long as the changes is done in line with the constitution

Despite different ideas and concepts, the people of us have to work closely in matters of same views in the national interests. If an individual or organization stands for election in accordance with the democratic practice to come to power in a justice way, that will be acceptable to everyone. Therefore, I would say our government will keep peace door open to welcome such individuals and organizations.

– He pointed out that the country might be prone to foreign underestimation and unfair treatment as the country is still developing; therefore, serious measure and efforts will be put into the country’s economic development.

– The 1st main focus is the agricultural sector.

– The 2nd is to transform the Myanmar into an industrialized country, which will create more jobs for the local and increase the people living conditions

– To strengthen the nation from one generation to another for perpetuation of independence and sovereignty.

– Prevent the country from the hegemony of others

– Ensuring that economic forces such as the State, regional organizations, cooperatives and private enterprises can work in harmony in the framework of the market economy.

– Encouragement to small and medium enterprises and FDI

– Ensuring that the benefits will be distributed fairly

– Assistance will also be given to national entrepreneurs for development of their industries and boost productivity.

– Create employment opportunities, stabilize commodity prices and encourage welfare and social security for the convenience of workers and laborers.

If we want the nation to enjoy development and economic growth, we will have to focus on industrial development.

– In order to improve the living conditions of peasants and workers, the government will occasionally update the laws to safeguard the rights of peasants, take actions to ensure reasonable prices of agricultural produce.

– Improve the standards of present universities, colleges, and high, middle and primary schools, provide more teaching aids, sharpen the abilities and improve the socio-economic status of educational staff, and increase the enrolment rates in middle and high schools.

– Cooperation with international organizations including the UN, INGOs, and NGOs

– Improve quality of the hospitals that opened over past two decades and skills of medical staff and especially the rural health centers and medical staff.

– Work together with international organizations including the UN, INGOs, and NGOs.

– Set up a health care system covering the participation of the State, the people and altruistic organizations to beef up community health care.

– Work more closely with international organizations in pursuit of the national projects on control and prevention of the three diseases: AIDS, tuberculosis and malaria.

– Conservation of forests and woodlands to reduce air and water pollution, control dumping of industrial waste and conserve wildlife

– Lay down a new policy for economic development, which is in parallel with environmental conservation.

– Mobilize participation of the people and social organizations in the tasks for environmental conservation and create renewable energy at low cost.

– Exercise non-aligned, independent and active foreign affairs policy and dealt with other countries in line with the Five Principles of Peaceful Coexistence.

– Do not permit any foreign troops to deploy within the borders of the Union and never launch aggression against and interfere in the internal affairs of any other country.

– Never pose threats to international and regional peace and security. These points are the pride of for the Myanmar’s foreign affairs policy.

The Last State of The Union Address

– As promised, we have carried out political, economic, administrative and private sector development reforms in order to fulfil the wishes of the people to have peace, stability and development.

– The president keeps insisting on people to follow the 7 Seven-Step Roadmap and the constitution.

– With the conviction to open their doors and extend their hands, the government released prisoners of conscience so that all citizens can participate in the political process

– Held the Union Peace Conference on January 12, 2016 based on the Nationwide Ceasefire Agreement

– To improve the socioeconomic condition of the people, the government placed their priority on 7 sectors:

– National Census Project for the first time in 30 years

– Proved to other countries that Myanmar is building a genuine democracy

– Enable the implementation of the FDI laws and special economic zones

– Get loans from World Bank, IMF, ADB, and ODA

– Start the process to become an EITI member country

We did all of this with the vision of building a nation with peaceful, calm, and pleasant people where goodwill, compassion, unselfish joy flourish.

– 15 state/regional level hospitals were upgraded to 500 bed capacity. Specifically, the Yangon General Hospital was upgraded to a 2,000-bed facility.

– Permitted the participation of the international operators, the mobile usage increased from merely 4 or 5% to about 80% today

– The price of SIM cards, which previously cost as high as MMK1.5 million to only MMK 1,500

– To solve this problem, the government has drafted the National Power Policy (developed with the cooperation from the World Bank) and a long term master implementation plan in cooperation with Japan International Cooperation Agency

– Power generation grew in the past 5 years to 1,822 MW, which enable 422 towns and villages access to electricity. In fact, Chin and Rakhine States are now connected to the national grid for the first time since the Independence

According to the Master implementation plan, 1.7 million household will have access to electricity between 2015- 2019

– Promoting responsibility, accountability, and working fairly for the benefits of the public, in accordance with laws, regulations and procedures

– To foster better collaboration between the Union government and the state/regional governments, Delivery Units headed by deputy ministers were opened

– Foreign media are allowed to freely reports from inside the country

– Drafted the Right to Information bill (transfer to the new government)

– Since then the government has worked to achieved peace, political stability, emergence of inclusive politics, and improvement of citizens’ livelihoods and skills

– The aim is to lay groundwork for the new government to enable the country to be a better place politically, economically, and socially

Our goals were much more expensive and ambitious than winning re-election for USDP or myself. They are greater than one individual or organisation.

– Aiming to make Myanmar the middle income country by 2020, private sector (the main driver of the economy) has been promoted and developed.

– Private sector participation in manufacturing increased to 72.8%, in agriculture to 97.2%, and 83% in services.

Thank you for reading this. I will post the analysis of this next week.